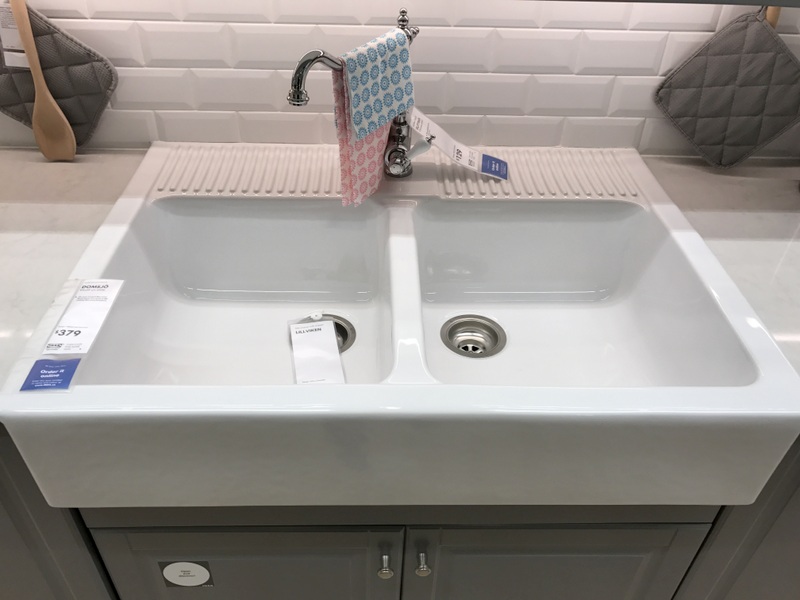 I am a die hard single bowl sink fan. My husband is not. In fact, I am betting you had a visceral reaction to what I just wrote. You either went “Hell yeah” or “Single bowl vs double bowl, and you chose single bowl. I don’t think so.” There is also a high probability you have had this stress inducing conversation while planning a kitchen renovation. It’s a sink. You’d think this would be a simple decision. But deciding between a single bowl vs a double bowl sink is probably one of the most contested debates when it comes to kitchen renovations.

Since the previous kitchen renovation, my husband has been adamant about getting the IKEA DOMSJÖ double bowl farmhouse sink for a future renovation. By future I mean the accidental one we’re in the middle of now, because the dishwasher broke, and flooded the kitchen.

I was like hell no. I wanted an under mount stainless steel one bowl sink. Like we had at our old house:

This debate between us started to involve bartering future design decisions for the house. Will he build me a dining table or can we just buy one? Will the bedroom get ugly blackout curtains vs my light airy ones? Can we get hardwood in the kitchen versus floor tiles?

He hated that sink above. Hated. Couldn’t stand washing dishes in it and having them dry on the counter. When he went to fill up his protein shaker cups with water or tried to wash his hands and saw meat thawing surrounded by dirty dishes, maneuvering around all of that drove him crazy. He also reminded me of how badly things went with that sink being that is was an under mount in the butcher block counter. Why would I ever want to go through that again?

And I was like do you know what my life – a.k.a the cook in the family – is like with a double bowl sink? No?

Thus let me explain what life was like with our horrible small double bowl in the kitchen. The kitchen that I worked so hard to paint that had to be torn out.

Let me reiterate again, the dishwasher leaked and destroyed the kitchen, thus leading to us renovating the whole thing. Completely unplanned by the way. We were not ready financially or otherwise to do another kitchen renovation.

Back to the sink. This was that small, double bowl sink. It doesn’t look offensive in this highly staged and edited photo right?

Look closer. It’s getting smaller isn’t it? Feels like it should be in a toy kitchen.

And the laminate counter top was so old that the faucet was rotting into it due to water damage and taking the sink along with it.

Every day, water pooled there. It was like a never ending puddle of gross.

What does the faucet have to do with it being a double bowl sink? Nothing.

I just had to share the corresponding atrocity. But that’s just one of the many things I hated about that entire triangular kitchen island.

The real issue was lack of space for anything in the sink and on the counter around it, which led to my complete disdain for double bowl sinks in general.

Not convinced? Let me show you a real life, no holds barred, honest photo from what our kitchen counter looked like, when it was actually in use AFTER the dishwasher failed.

Maybe it will look more kitschy in a Polaroid shot. Scroll up and then back down. That is the same counter as the first counter photo.

Now, will you stop believing everything you see on the internet?

No one lives perfectly. No one. Even if it appears they do.

I get hives just looking at that now.

That was my life for easily 6 months. Well, almost a year and a half really because even if the dishwasher was there, there was always more dishes to wash, drying on the counter. The counter top to the right side of the sink? That’s pretty much all the counter space I had to prep dinner on for a family of 4.

It was the size of a cutting board.

This is the stuff that when you walk into a house while house hunting, that you need to pay attention to. Not the fancy wood floors or pretty wallpaper, but the things that impact your life on a daily basis. Kitchen counter top space and functional kitchen layout. If you want to see the kitchen “Before and After” I painted it, how I painted the cabinets and what’s behind me, that post is coming.

So at this point I was so disgruntled from the above that the thought of another double bowl sink was just out of the question. I loved our old single bowl sink. It was huge and held everything. It was the IKEA BREDSKAR sink (which of course has since been discontinued) but IKEA has new models to replace it.

And yes it comes in a Double Bowl.

But even that double bowl is just not big enough for the way I use my kitchen. I cook a LOT. My husband eats and trains like an athlete. Our girls seem to be growing non stop and the kitchen fridge is always being opened for more food. I needed what I affectionately call a high maintenance sink. My husband however was convinced I would love the DOMSJÖ.

Don’t even think about however, mentioning the 60/40 split sink.

Under mount, apron front, stainless or not I would continuously stare at it and secretly think, “Why is the line that divides the the sink not in the center of the sink?” Kind of like this Buzzfeed article about control freaks that feature images that cause me unnecessary stress. I don’t care how practical they are to use and how much people love them. Not happening in this house.

Well, practicality more than anything. Otherwise known as my husband.

With this sink, I don’t have to worry about rotting faucets into the counter tops and water getting around the edges of the under mount seeping into the wood causing cracks. That kick ass matte black faucet by the way is from Delta – the Trinsic Single Handle Pull Down Kitchen Faucet – and it is phenomenal.

What do I really think of the DOMSJÖ sink after having it for a month? It’s good. It’s very big. Still want an under mount. But in the meantime I got to paint our main floor bathroom dark navy. Yessssss. Compromise.

The story to be continued. I did however get a chance to write an essay about the DOMSJO sink itself. If you have a DOMSJO, should yours ever crack, break or you need a replacement, you need to read the post.

In the meantime, I send you my thoughts and prayers in your single bowl vs double bowl sink battle, that you may be having in your own house right now. 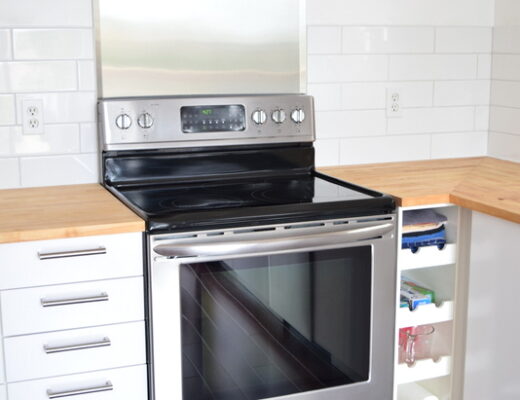 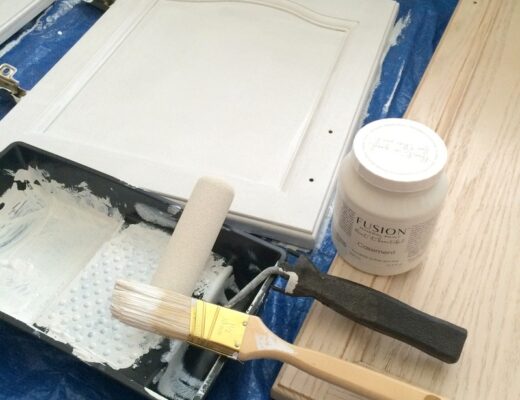 How to paint kitchen cabinets with Fusion Mineral Paint 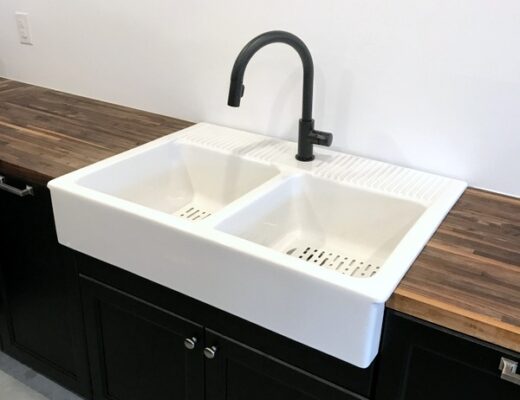 The IKEA DOMSJO sink was discontinued – now what?