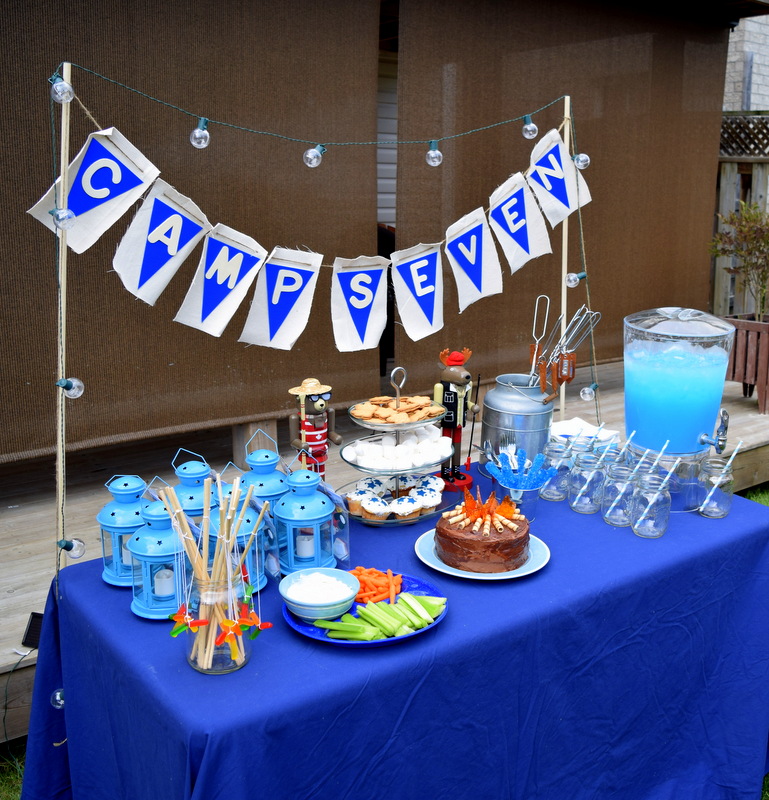 If you have a kid who has a summer birthday, have a camping party at least once for them in their lives. This was the one of the most fun parties we have had for two simple reasons.

1) Kids get to go to a campfire and hang out with their friends.

2) They get to roast sugar on sticks – a.k.a marshmallows.

Add in some glow sticks and you’re parent of the year.

This post is for all you decor and DIY party people who love putting on events and decorating for the holidays as much as I do. And despite me forgetting at least half a dozen decoration ideas for the backyard and the table, in the end it didn’t matter. But I’ll get to that in a bit.

First let’s start with the cake.

This is known as the famous Campfire Cake.

When I sat my daughter down to show her some ideas for cakes on Pinterest, she instantly said, “That one.” Then I think I said “What?”, because you have to make the fake fire out of melted candy.

Well, like the terrible grocery list follower I am I forgot to buy orange and red candies to do that with. So I actually made the flames from scratch with sugar, corn syrup and food coloring. I did however buy the Pirouline chocolate sticks to act as logs.

The flames for the fire turned out. Trust me when I say this is a miracle. If I can do it, anyone can do it. The cake mix itself is Betty Crocker.

Now let’s get to the other snacks on the table

I also bought rock candy lollipops.  I could have made them. Pinterest told me I could. I however did not.

I plead the Fifth despite being Canadian about the mason jars.

If you read my blog you know I have a love hate relationship with mason jars. But birthday girl said Mom can we please use the cups from my Rainbow party, and I said ok.

So this is her doing. Mixed in with some Ice Blue Raspberry Lemonade Kool Aid to match the whole blue color scheme.

As we were getting all the decorations ready for this, I received an email from the folks at Pottery Barn who said, “Would you like to use our Kids Cambria Tabletop Collection for your event?”

Let me tell you, my kids love this set. They use it every single day. The plates and bowls look like they’re made of stone or some breakable material, but in reality they’re made of this lightweight melamine. The tumblers are made of Tritan, a shatter resistant plastic and are BPA free.

We have it in the turquoise, so we kept some extra glasses and bowls around the fire pit for people to use to hold any snacks or S’mores.

My daughter made all of these. String + gummy worm + wooden dowel. I’ve also seen these made with pretzel or breadsticks.

You also can’t have a camping party around our neck of the woods without a little bit of Canadiana decor thrown in.

Some nutcrackers from Superstore and Maple Leaf cookies did the job.

I made the kids some leather name tags for their marshmallow roasting sticks, using my leather that I had leftover from a previous craft.

I imprinted their names on aluminum tape that I had originally ordered for my DYMO embossing label maker. However, I ordered the tape in the wrong size! So I wound up using my leather stamp set to stamp the tape instead.

It’s an easy way to keep track of whose stick is whose.

And I forgot to do that for the mason jars and within 10 minutes nobody had a clue whose cup was whose.

I also made some more name tags for the party favors “aka loot bags”, which were blue lanterns that I got on clearance at two for $5 at Superstore.

We added some camping stickers and battery operated tea lights ( both items were also two for $1). My daughter made the rainbow loom bracelets/rings to go with each.

I know loot bags are a controversial thing when it comes to parties, but I tend to look at them as more of a token to remember the party by. So I thought the lanterns would be a nice thing for the kids to take home so that maybe they can have their own camp out, even in their basement or imaginary bed sheet tents.

I am proof that you do not have to spend a ton of money. You just have to shop clearance.

Speaking of imaginary bed sheets, yes we made a tent.

I thought about whether or not to do a tutorial on this one but really, there are so many good DIY tent tutorials already online that I don’t see the need for me to add to that. Some of my favorites include the ones from Kelly Murray and My Cakies.

The only major difference we did with ours was we made it bigger – taller that is. So instead of it being 48″ in height for the vertical poles, we made ours 60″ (5 feet) as our daughter is very tall for her age.

And instead of using a Twin sized flat bed sheet for a the tent fabric, we used a Queen sized flat sheet that was folded in half, cut and heat iron tape hemmed together at the top. At the bottom I put in some eyelets and ran ribbon through them to tie it to the poles.

The only other DIY decor project was the banner.

This was made from dropcloth, bright blue bristol board and wooden letters.

A note about birthday parties in the era of Pinterest

But at the end of the night, it didn’t matter.

We tend to look at all of the parties that we see online, on blogs, and on Pinterest and think, “How can I measure up to that?” or “What happened to hot dogs and cake?”

Well in this case I actually had hot dogs and cake, as that was literally the only food I prepared. But there was no endless hours of kneading dough for rainbow cookies. I’ve learned my lesson with that side of party planning, and that is that, I always made too much food, and stressed too much about it.

My daughter and her friends had their own favorite thing, and in this case it turned out to be the name stamped tags. And that makes sense as I’ve found that anything personalized usually wins kids hearts, especially if they have a name that’s unique and hard to find on store bought merchandise.

I now see parties in a different way.

I look at them as inspiration, not expectation.

So if you choose to incorporate party ideas that you see online at your own future parties, always remember to do it because you want to, not because you have to. And if you forget things and the cake starts to melt (the fire started to melt!!), the world will not end. Because a party can have all the pretty decorations in the world, but if friends aren’t there to share it with you, none of that matters.

In which case don’t stress about the wood slices.

But by all means knock on wood to make sure it doesn’t rain. 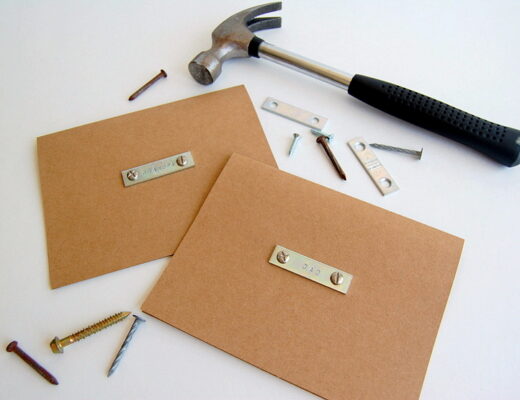 DIY Father’s Day Cards – Made with a Metal Stamp set! 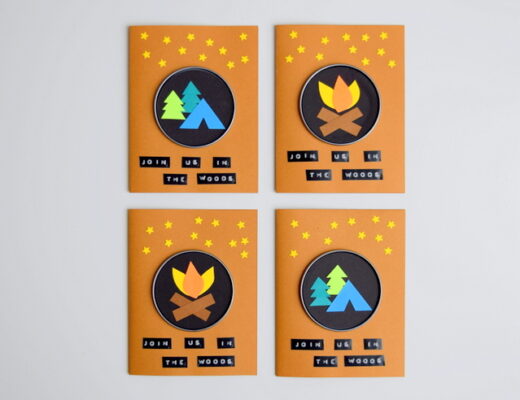 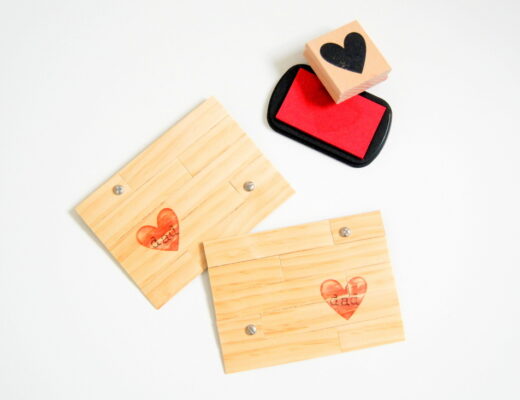