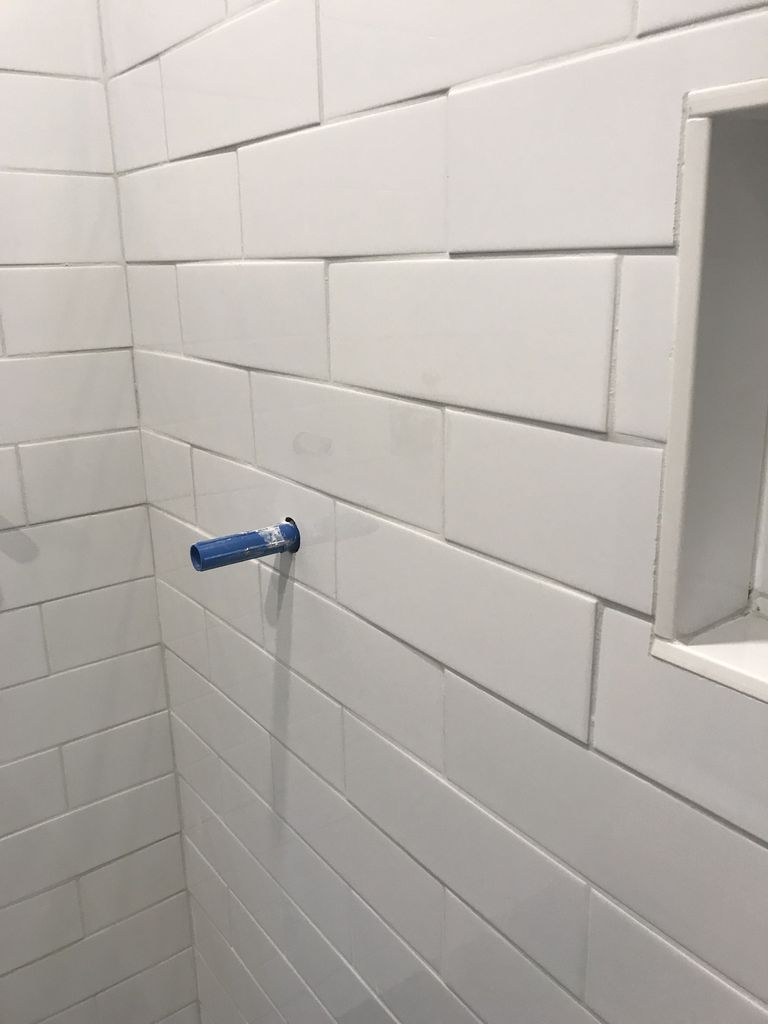 Our bathroom renovation nightmare – How it all began

As much as I don’t want write about this experience, because I want to give credit to the people that wound up helping us in the end, I can’t do that without the backstory. So here we go.

We did what we thought was the right thing. We interviewed multiple contractors. Checked their portfolios. Read reviews. Met with several of them again to see if there was a good chemistry with us and them. When you’re going to have strangers working in your home for at least 3 weeks, especially people going through your bedroom on a daily basis, you’d better be comfortable with them being in your home.

So yes, getting along with the person and their crew members, is a big deal. Budget was important, but most of the contractors we interviewed, their estimates fell in along the same lines so that was not a make or break it point for us – at the time.

In order to make it as easy as possible on the timeline, here’s a list of memorable points about our ensuite bathroom renovation:

Why hire a contractor vs DIY?

The reason we hired a contractor in the first place is because we did not have the time to do this ourselves and we wanted the tiling job to be perfect. My husband had never leveled a shower floor, and after tiling our previous kitchen, had grown to hate tiling.

You know that old adage time is money? In this case it was the #1 reason we wanted to hire this job out. We thought that by hiring professionals, we would have a better end result than the stress that often comes with a DIY renovation.

So it’s like added salt on a wound that we had to finish this ourselves, and go over budget. And by we I mean, mostly my husband as I am about as useful with a drill and a miter saw as I am with baking cakes.

The first inclination that something was not right came in the form of that voice inside my head. That gut feeling when our first contractor, showed us photos of a previous clients bathroom renovation they had done.

He mentioned off the cuff they had to cut a 12 x 20 tile in a different angle as to accommodate the floor slope. Basically making the shower tiled floor look really bad. I remember thinking at the time, that’s not going to fly here but of course, didn’t say anything to him. I thought surely there were extenuating circumstances.

THE BATHROOM BEFORE AND NEW LAYOUT PLANS

We were getting rid of a corner bathtub (on the right) and the shower (on the left), and turning that space into a walk in shower with a double vanity adjacent to it. The old shower space was to become a closet that you could use from our upstairs hallway, giving us badly needed more storage.

The corner below used to be the whole shower.

It was turned into a closet with the entrance from the exterior hallway.

I could write a horror story about all of the mistakes that happened and turn it into a thesis.

But here are the highlights for lack of a better word:

THE REALITY CHECK OF BATHROOM RENOVATIONS ON BLOGS AND INSTAGRAM

Despite what you may see on Instagram and home decor blogs where the average family seems to have some endless budget to build a custom farmhouse outfitted with a Lacanche gas range, and a Sub Zero fridge to accommodate their kitchen pantry, we are not some wealthy family that could afford even this.

The old shower had leaked and this had to be done. We tried to find someone to repair just the small shower initially, and could not find a single contractor willing to do this. Everyone wants “the big jobs”.

I remember walking into the bathroom, taking a look at the subway tile in the shower after they were done tiling, and I just started to cry.

Then I called my husband at work and sent him these photos.

The feeling of watching our money being squandered at the expense of such incompetence and irresponsible, lazy workmanship, was horrifying. This was three months in, and three months of contractors walking through our home and up the stairs, in and out of the bedroom.

Our carpet, including the stairs, is pretty much destroyed at this point too due to the traffic, work boots, and materials.

I stared at the shower, and just kept going over math figures in my head as to which line of credit we would pull from to have this fixed. And who on earth we could find to even be willing to step in and fix this?

How could we trust any contractor at this point?

Looking back it’s painfully obvious we should not have even accepted a second time fixing the shower floor. There we so many errors made and justifications for the errors, that we should have cut ties right when the excuses started.  My favorite was, “The house walls are uneven so the shower tile is not even.” PS – They built those shower walls.

Our contractor and his crew, really had no idea what they were doing. But because they were “nice people” we kept giving them chances.

I have thought time and time again, whether or not to name the contracting company. It’s very easy in this day and age to tag a brand on social and ruin their reputation. There have been days where I look at the debt we have to pay down now and think, what if they do this to another family? Have they done this to another family?

The truth is, we had a big discussion with the contractor, he apologized and then at our request, him and his crew tore everything out to the studs again. We left on very uncomfortable terms, as anyone would expect. It was painfully obvious that they had gotten in way over their heads with this project, and did not have the necessary skill set to renovate a bathroom,let alone, finish the tile or plumbing.

We haven’t named them because we said we wouldn’t. I realize a lot of people may disagree with this, but someone who works in social and content marketing, I see every day the substantial ramifications of what one bad tweet can do to someone’s life. We’ve made our peace with this.

And while we are unhappy with their work, it’s not going to solve anything. It’s also not going to give us back the time and money we lost in this bathroom renovation nightmare.

The torn out shower

THE NEXT STEP – PLAN B

WHAT HAPPENED AFTER THE BATHROOM WAS TORN OUT AGAIN

The sad part is, we are the luckier ones in the bathroom renovation nightmare stories that people talk about online, and in forums like Houzz and in Facebook groups. Tales of contractors leaving halfway through a job, leaky fixtures leading to water damage on the other floors of the house, tile jobs where things are cracking and botched, and even contractors showing up a year later to demand payment to scared, elderly Senior Citizens, threatening them.

You’d think in this day and age there would be a board overseeing the home renovation industry. But there isn’t.

I’ve talked to many people in our town, including a couple that are living in a $50,000 disaster of a kitchen, that is falling apart, and were told by their lawyers, the probability of getting their money back is slim to none. Most courts won’t even take your case unless you’re into the hundreds of thousands of dollars. So the average person loses their ten, twenty, thirty thousand dollars, and then wonder why they didn’t get into a career trade like carpentry, instead of a marketing job. That’s me.

Financial issues aside, we were lucky enough to find (after a lot of searching and speaking to clients directly), several people – various specialty contractors – to help us out. I don’t want to name them in this post as I don’t want their names linked to this particular blog content when people search for them online, and be led to these images. Which absolutely do not speak or reflect their work.

You can find who helped us in Part Two.

PROLOGUE: The expensive reality check known as your bathroom renovation

PART ONE – you just read it

PART TWO: The contractors who rescued our bathroom renovation

PART THREE: The Ensuite Bathroom Renovation Reveal – Before and After 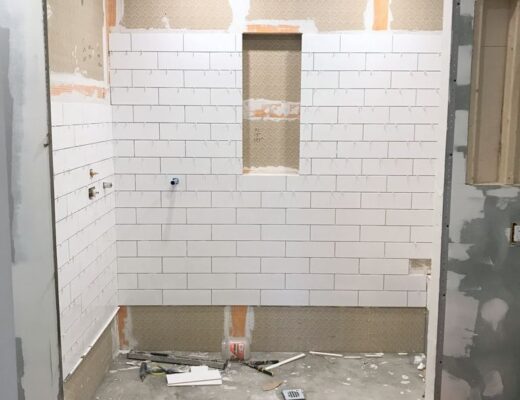 The contractors who rescued our bathroom renovation nightmare 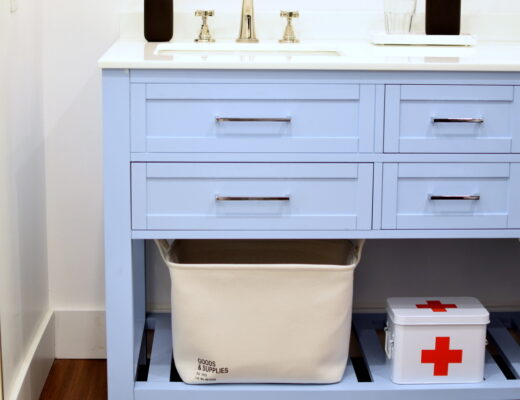 The Ensuite Bathroom Renovation – Before and After 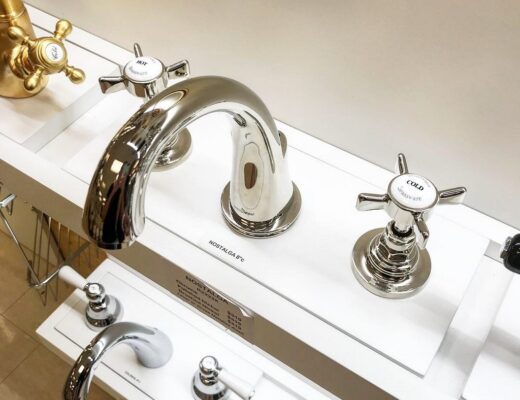